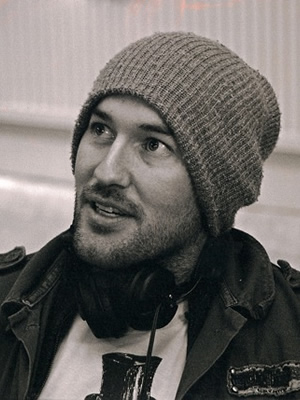 Ben Palmer has directed Simon Bird and Joe Thomas in The Inbetweeners. Now he takes on the Director role for Chickens...

Hi Ben. Why did you want to add Chickens to your CV?

I'd worked with Simon and Joe before, and I thought the idea was a fresh, unique take on that slice of history. I just really like their writing.

What do you think Jonny Sweet added to the mix?

Jonny is brilliant and so ideally suited to Bert. Because the three of them have known each other for years, performed and written together, there's an innate chemistry. They're a natural fit.

You've directed plenty of comedies in your time, including the smash hit Inbetweeners Movie. Do a certain set of challenges come with shooting a comedy?

Your instinct is to serve the joke. You need to have a good sense of humour, to recognise the comedy in the writing and also strive to make it look as good and stylish as it can possibly be. Sometimes those things can fight each other.

And what obstacles did you have to overcome with Chickens?

The fact it's a period piece comes with a mountain of challenges. When you're doing something set in 1914, everything becomes that little bit harder. I was really keen for the village to be as large a character as the three boys, so finding a village that felt authentic was a tough act to pull off, not to mention making the production design and costumes true to that time. Against that, though, the boys' writing has got a modern vernacular, a pacy, contemporary style, and my instinct was to shoot it with a handheld, fluid camera to give it a quirky look, not to play to period conventions. We made life very difficult for ourselves [laughs].

Everyone needs a challenge! How do you think Simon and Joe have changed since you first worked with them?

They were first and foremost the writers [on this project] and had absolute ownership over the script. It was really nice to see them not just as performers but as writer-performers in their own right, and I think they handled their responsibilities brilliantly. They would slave over every single word and were always fine-tuning. 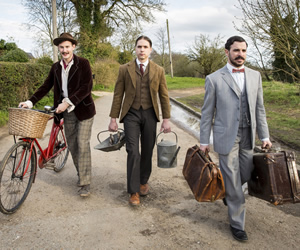 Who was the biggest joker on set?

There's not one bigger than the other. I think Jonny's instinct is to wisecrack at everything so, I suppose, in that respect he's the more obvious joker. What was good is that they all support each other. If one of them is having an off day, isn't happy with their performance, the other two will come round, give notes and build them back up.

So the atmosphere on set was a good one?

It was a really enjoyable shoot actually. I mean it was hard and the location stuff was tough, with a lot of night work, but we had a great crew, the chemistry between the three boys and you know you're doing the right stuff when you're shooting and people are laughing.

What's the one lesson you've learned working in this industry?

Surround yourself with good people, with people who are genuinely excited about the project, and be prepared to try out different things throughout the process. Trust your instinct.

How about your pet hates when it comes to directing?

Running out of time [laughs]. You never, ever have enough time. The other thing is being underprepared. I once made the mistake of being unprepared, not knowing where I should put the camera next, and, now, I'm a stickler for huge amounts of prep and knowing exactly what I need to do. Even if you change it on the day, at least you've got the plan to fall back on.