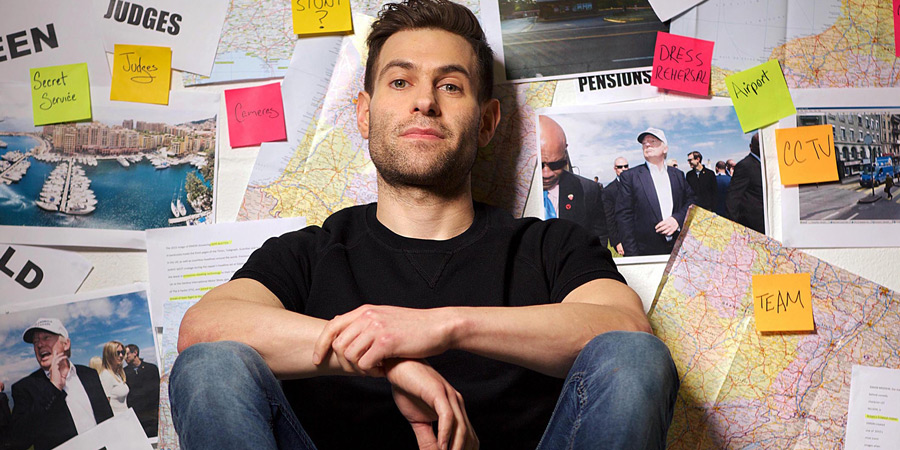 Simon Brodkin, the man behind comedy character Lee Nelson, created one of 2015's most iconic images when he showered disgraced FIFA President Sepp Blatter with banknotes in front of the world's media in Zurich, but the methods behind this and his other audacious stunts have always remained secret. Until now.

In 2016 Channel 4 secured exclusive and unrestricted access to Simon as he set his sights on three of the world's most notorious figures: Simon Cowell, Sir Phillip Green and the 45th President of the United States of America, Donald Trump. With never before seen footage, Britain's Greatest Hoaxer lifts the lid on the months of meticulous planning and preparation that go into pulling off a successful stunt. With tension, drama, disguise, false starts, arrests and near misses with the U.S. Secret Service, the documentary will reveal the extraordinary and even dangerous measures Simon takes as he bursts the bubbles of some of the world's richest and most famous people.

The 2015 image of Simon showering Sepp Blatter in banknotes made the front pages of the Times, Telegraph, Guardian and Independent in the UK, as well as countless headlines around the world. Previously Simon has joined Kanye West on stage during the rapper's headline set at Glastonbury; helped Volkswagen fit the latest in emissions-cheating technology to their new car at the Geneva International Motor Show; gate-crashed a prime-time Saturday night broadcast of The X Factor; and joined the England football team ahead of their flight to the 2014 World Cup in Brazil.