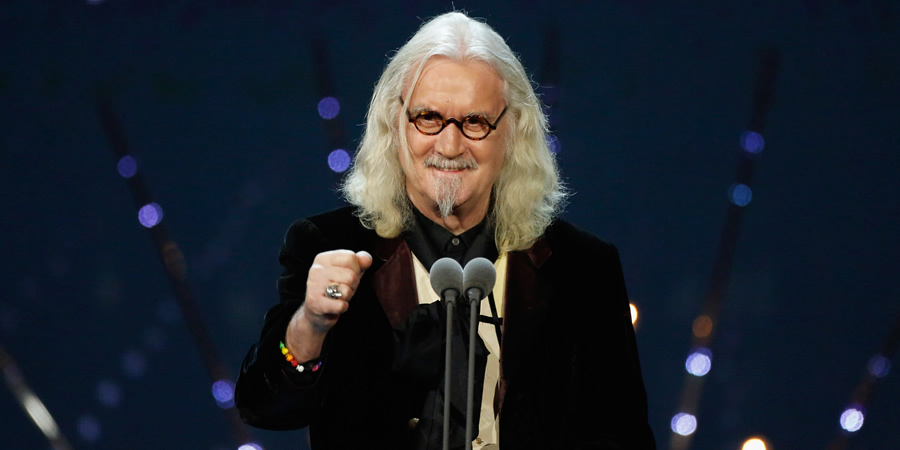 Documentary about the comedy career of Billy Connolly, including an interview with the star himself

Billy Connolly and fans mark his five decades in comedy

One-hour special features classic clips alongside new performance footage, fan revelations and star stories plus a brand-new major interview with the man himself.

For five decades now, Billy Connolly has been making us laugh about the very stuff of life. He is beloved across the generations for his anarchic, life-affirming humour - and the unique bond he has with his audience.

Here, fans of all ages from all around the globe share their extraordinary stories about how Billy has amused, inspired and influenced them. The one-hour special rewinds his classic stand-up moments, alongside new and unseen performance footage.

Stand-ups Peter Kay and Adam Hills reveal how Billy inspired their comic careers. Billy's wife Pamela, no comedy slouch herself, talks about life with Billy from their new Florida home.

Uniquely, we also hear from Billy's public - from students to pensioners, from Scotland to Qatar - telling heartening, emotional tales of how Billy helped them find love, give birth, change career, tackle obstacles and even come to terms with their disabilities.

These video diary-style anecdotes, sprinkled throughout the film, provide an intimate counterpoint to a major new interview with Billy Connolly himself, recording his reaction to the fans' stories, along with reflections on such topics as turning swearing into an art form and the underestimated power of laughter.

Narrator Suranne Jones is also a devotee: "My dad was a huge Billy fan and I grew up loving Billy. So, it's an honour to be involved in Billy Connolly & Me: A Celebration."

Looking back on the great man's wild 50-year career, Billy & Me is full of laughter, tears and unforgettable moments, hailing Billy's influence on those who have come into his orbit. So tune that banjo and pull on those wellie boots as we spend an uplifting, celebratory hour in the company of the Big Yin.

Thanks for the memories, Billy, and keep making more.

This programme is also widely referred to under the title Billy Connolly & Me: A Celebration.