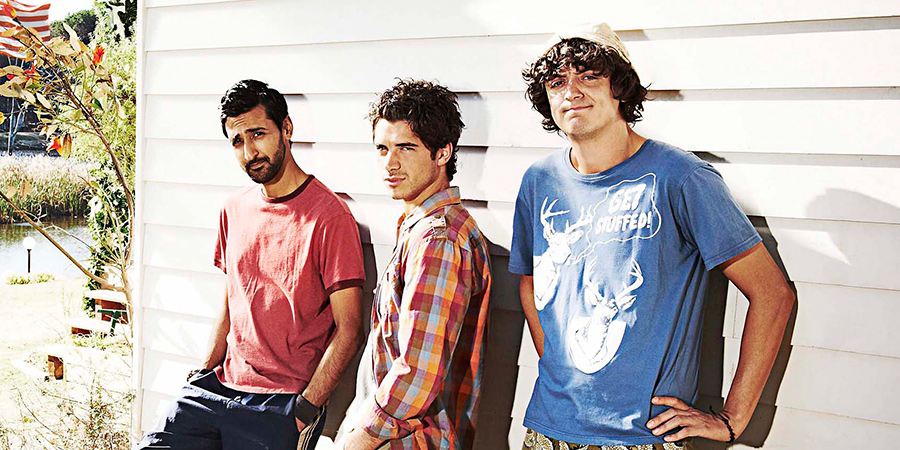 "The key to a great summer camp is the quality of its staff. At Beaver Falls, we pride ourselves on recruiting only the finest, most morally upstanding young adults from across the globe. So you can rest easy knowing your children are in safe hands at Beaver Falls!"

New E4 comedy drama Beaver Falls follows best friends Flynn, A-Rab and Barry. They're three British chancers, fresh out of uni and determined to have one last summer of carefree irresponsibility before they face the real world.

From very different backgrounds, the trio met at Oxford Brookes University (rule one - never mention the Brookes), were thrown together as housemates in their first year, and have never looked back since.

Somehow, they've managed to blag themselves jobs at Beaver Falls, an elite American summer camp for the ridiculously tanned and beautiful teenage offspring of California's rich and powerful.

This is a summer job that requires them to be responsible. To set an example. To be role models... Yeah, whatever! There's no way they're going to let the job spec get in the way of their single-minded pursuit of 'The Ultimate Summer'. Two months of hanging out, chasing girls and getting into mischief beckon for these boys, who are all set for time of their lives...

But things have a habit of not quite working out the way they expect: no one mentioned that the kids they'd be looking after would be that annoying!

Plus, in order to get the gig, they lied. Through their teeth. So the camp's under the impression they've employed three blue-blooded, Oxbridge-educated paragons of stiff upper lipped Britishness. Whereas the reality is somewhat different... They're the mongrels trying to make out with the pedigrees. But grabbing what you want from life, reinventing yourself, rising above your station, being all you can be - well, that's just living the American dream. Right? These boys are all set for a summer they'll remember for the rest of their lives. If they can just get through it without getting found out and deported...