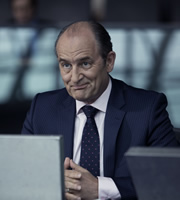 A private security firm calls the police for assistance at a Youth Offenders Institution riot, giving Commissioner Richard Miller an ideal opportunity to highlight the force's opposition to the transfer of essential services from the public to the private sector.

But when Scotland Yard's PR strategy comes under pressure, tensions between the police and City Hall boil over and Miller finds himself under attack from Deputy Mayor Grant Delgado.

As the TSG is despatched to quell the unrest Robbie wonders whether he'll make it out unscathed on his last day before firearms training and documentary cameraman Matt may have spotted a dangerous liaison within the ranks.

Meanwhile, Warwick's nerves are shredded after the police release footage of him shooting an unarmed assailant. Worried colleagues Tony and Banjo think they may have just the thing to straighten him out...

Remind yourself as to what happened in the first episode of Babylon.