A sniper is on the prowl, picking people off, seemingly at random, across London. It's a hectic first day for new head of PR, Liz Garvey.
Preview clips 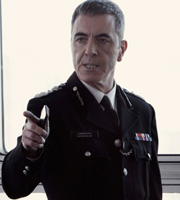 Coppers. The Sweeney. Plods. The Old Bill. London's police force - the oldest in the world - is in need of a public image revamp, and Chief Constable Richard Miller has found just the woman to do it.

Introducing Liz Garvey - an American visionary from the world of new media, parachuted in to revolutionise a PR department struggling to keep up in an age of rolling news, smart phones and a news-breaking, information-hungry public.

Also running operations at police HQ are Commissioner Miller's right-hand man Deputy Commissioner Charles Inglis, loyal Staff Officer Tom Oliver and Liz's second-in command, Finn. Out on the streets Territorial Support Group (TSG) officers Davina and Robbie are tasked with upholding the peace - though Robbie would much rather be playing with the big boys of Specialist Firearms Command (SCO19), joining the likes Officer Neil. Meanwhile they're trailed by fly-on-the-wall TV cameraman Matt Coward, desperate to capture some juicy footage at the heart of the action.

The cast of the show introduce the pilot episode of Babylon.

The Making of Babylon

The cast talk about making the pilot episode of Babylon.