8 Out of 10 Cats is a long-running modern topical panel show from the Channel 4 network in which the questions are based on statistics and the results of opinion poll surveys. The surveys are not on 'serious stuff' like voting intentions, or attitudes to the Euro - they're designed to root out the more important issues of the day, like 'What do the British public prefer, Kittens or Christmas?'. Of course, like all panel shows, the humour is not so much derived from a right answer but from the panellist's banter. 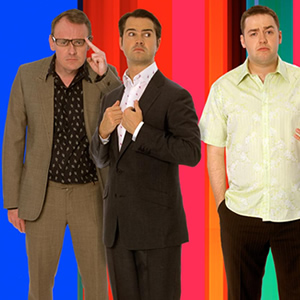 8 Out of 10 Cats is hosted by Jimmy Carr with two fellow stand-up comedians as the team captains. Up until 2015, Sean Lock was always the captain of the team on the left of the screen, whilst Jon Richardson was in charge of the other team. Richardson took over from Jason Manford, who was captain between 2007 and 2010. In the first four series Dave Spikey was the regular panellist on the right. In 2016 it was announced that the show would be moving to More4, with a remit to cultivate up-and-coming talent. Rob Beckett and Aisling Bea were announced as the team captains. The show now continues in its new format, but can now be found on E4.

For a number of years, there was a special 8 Out of 10 Cats episode featuring contestants from Channel 4 reality TV show Big Brother in August, but now the format is a Channel 5 property this is no longer the case.

8 Out of 10 Cats episodes tend to follow the pattern we describe below. Which middle round appears depends upon which series it is (as the earlier episodes had some different games) and the editors' decisions too (as more material is recorded than will fit into the half-hour broadcast).

Introduction: A voiceover introduces the contestants. Jimmy Carr then bounds onto the set with some quick gags based on statistics.

Round 1 - What Are You Talking About: The panellists must decide the British public's top five most popular talking points of the week. The results are based on a poll especially conducted for the show each week by the polling company Harris Interactive. This round tends to take up the whole first half of the show and it is where many of the topical gags are heard.

Middle Round - Poll With The Hole: The teams are given statistics that are missing one 'salient piece of information'. The teams must guess what each statistic is about, or what the answer to the statistic is. For example: 60% of air passengers have had problems with ______ (real answer: their seat)

Middle Round - Believe It or Not: The teams must guess if the statistic Carr reads out is true of false. This round is often illustrated using a funny related clip.

Middle Round - Pick Of The Polls: A team get to pick a poll topic from the choice of four, and must then guess the answer to the poll. e.g. "Most people secretly want to do another job? True or False".

Middle Round - Word Association: An old round. The teams have to guess the top thing people associate with a particular word. This round is sometimes illustrated using a funny related clip.

Middle Round - What's the Poll?: An old round in which the teams were given, one-by-one, pictures of five famous people; the first team to guess what poll connected the celebrities shown won the round.

Middle Round - Face Off: An old round which saw the panellists having to guess who, from a list of famous people, came top of a particular poll.

Final Round - And the Winner Is: The last round sees Carr give the teams a series of opinion polls and surveys from around the world, it is then up to the teams to buzz in and tell him who or what came top of that poll. Example: the thing that most annoys men (answer: according to a poll by Goodfellas Pizzas, it is someone hiding the TV remote)