Radio 4 series Knowing Me, Knowing You... With Alan Partridge is to be released as a collector's edition vinyl set.

Celebrating 25 years since first broadcast of iconic Alan Partridge series, "every word" of the December 1992 series is being transferred to three vinyl discs.

Two episodes were previously released on vinyl for World Record Day 2016, but this is the first time the entire series has been collected together in the format.

The BBC says: "Written by Steve Coogan and Patrick Marber, featuring additional material from Armando Iannucci, this is the series which introduced the cultural icon that is Alan Partridge to the mainstream, leading to several successful TV shows and the film Alpha Papa."

The character is due to return to BBC television in early 2019 with new sitcom This Time With Alan Partridge.

Knowing Me Knowing You - The Complete Original BBC Radio Series

Available for the very first time on vinyl, Demon Records proudly present every ruddy word of Knowing Me Knowing You, the complete award winning BBC Radio 4 series (1993 Gold Award winner). This is the series that really introduced the cultural icon that is Alan Partridge to the mainstream, leading to his TV chat show, two series of I'm Alan Partridge, Mid Morning Matters, the Partridge movie Alpha Papa, and his subsequent return to the BBC in 2019. "I'm Alan Partridge, I am sports-casual"

First broadcast in December 1992, the series was written by Steve Coogan and Patrick Marber, featuring additional material from Armando Iannucci. "Welcome to Knowing Me, Knowing You. Knowing me Alan Partridge, knowing you - the you - the audience." 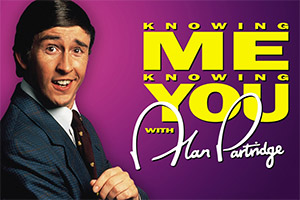 Knowing Me, Knowing You... With Alan Partridge