Party's Over would appear to share some parallels with Theresa May's story.

Describing the show, the BBC says: "What happens when the Prime Minister suddenly stops being Prime Minister? One day you're the most powerful person in the country, the next you're irrelevant, forced into retirement 30 years ahead of schedule and find yourself asking 'What do I do now?'.

"We join Henry soon after his crushing election loss. He's determined to not let his disastrous defeat be the end of him. Instead, Henry's going to get back to the top - he's just not sure how and in what field..."

They also quote the character as saying: "I can't just disappear like David Cameron. They say he barely gets out of bed now. Just sits there doing word-searches and eating Kit Kat Chunkies. Miserable. I hate the chunky ones."

The comedy has been created by Paul Doolan and Jon Hunter, who have both previously worked on scripts for supermarket sitcom Trollied. The show is produced by Simon Nicholls, who also works on Radio 4's long-running sitcom Ed Reardon's Week.

News of this show follows on from Jupp announcing he has quit The News Quiz to allow himself to "focus more on acting and writing".

Party's Over will be recorded at BBC Radio Theatre on 5th July (Tickets), to be broadcast on Radio 4 later in the year. 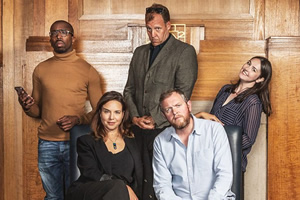