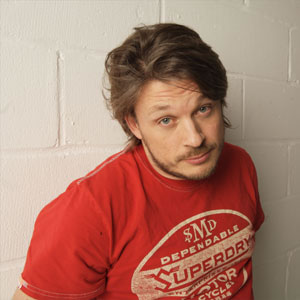 The nominations for the Sony Radio Academy Awards 2013, the highly coveted honours covering audio output, have been announced.

In the comedy category, the five programmes nominated are as follows...

Notably, this is the first time - at least in recent memory - that a non-BBC programme has been nominated in the comedy category.

Richard Herring's Leicester Square Theatre Podcast (pictured), an online interview series published by British Comedy Guide, is nominated alongside four BBC radio comedy series. In previous years internet shows had their own category but from this year they are elligible for nomination alongside traditionally broadcast productions.

Meanwhile, stand-up comedian and British Comedy Guide contributor Tony Cowards is part of the writing team nominated as 106 JACK fm in the Best Station Imaging category. The station is known for playing short jokes in between many of its songs.

The Sony Radio Awards have been running for more than 30 years and are highly respected within the broadcast industry. Winners in the comedy category in recent years include Mark Steel's In Town, The Jason Byrne Show and Adam & Joe.

The nominations were announced today during a live webcast. The winners, which are decided by industry and media professionals, will be announced at a ceremony on Monday 13th May.

Comedy writer Danny Baker, who was dropped last year from BBC London in what turned out to be a highly commented upon last show, is also nominated for Speech Radio Broadcaster of the Year - albeit for his Radio 5 Live programme.

The full list of nominations can be seen on the Radio Academy website. Notably Radio 1's breakfast show is missing from the highly competitive morning category, but all the BBC's other main nationwide breakfast shows are listed.