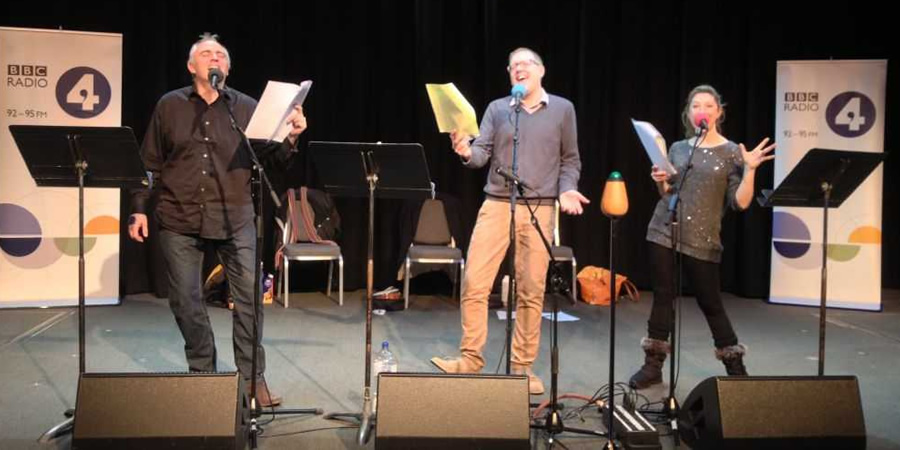 Each episode of this radio series takes an easily identifiable public figure and contorts their story into a bitesize West End Musical.

In true West End style, artistic licence is well and truly taken and stretched, as easily identifiable public figures are dressed up, gilded, fabricated and placed against a random musical backdrop for sugar coated consumption. The stories are simple and engaging but with an edge - allowing the audience to enjoy all the conventions of a musical (huge production numbers, tender ballads and emotional reprises) whilst we completely re-interpret events in major celebrities' lives.

Series 5 covered the US Election, Piers Morgan's search for his real father (Pappa Pia), Nick Clegg's search for a personality, Demon chef Ramsay Todd's search for the perfect pie ingredient, Ebenezer Brown's search for Christmas cheer, and Boris Johnson driving a bus from Beijing to Bow in the hope that he'll arrive in time for the London Olympics.

Those given a comedic West End musical makeover in Series 6 included Bruce Forsyth, Ed Miliband, Fabio Capello and the Coalition and Ant & Dec. The Queen also featured in a 15 Minute Musical which saw her look back at the public figures she's met during 2010.

The show returned again for Christmas 2013 for an 8th series, with Nigel Farage, Julian Assange and Simon Cowell amongst the life's set to music.

The most recent two episodes were for Christmas 2016, looking back at Donald Trump winning the US Election and Britain voting for Brexit.