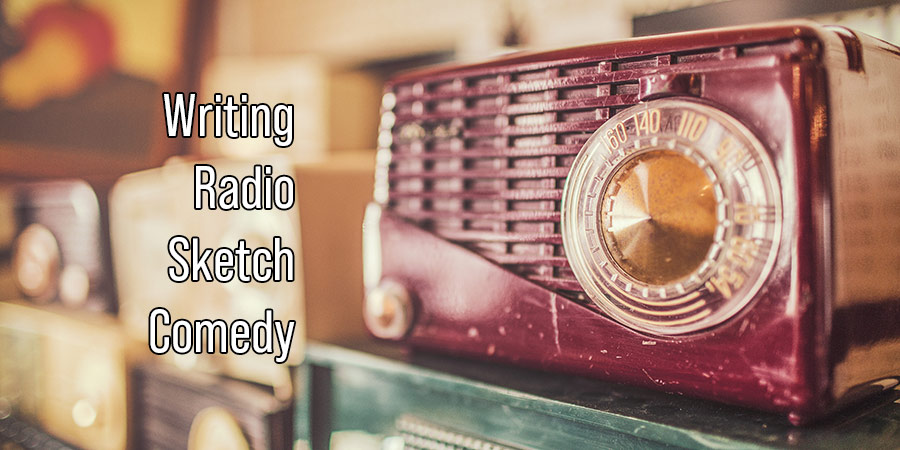 Watch this video to see how the courses work!

Stretch your comedic imagination and write sketches set (for example) in the rainforest, on a desert island, under the sea, on a battlefield, in history, in space, in an ant hill, in a cutlery draw... Then optionally bring them to life in your own recording of the sketch.

Radio comedy has a creative freedom that's hard to find anywhere else. You can set sketches ANYWHERE in the world (or the universe) and you can write action that would be impossibly expensive to film and conjure it all up with sounds, voices and music. You characters can also be ANYONE or indeed ANYTHING without the complication of needing costume or makeup. Radio comedy writing also also has overlap with animation and live sketch comedy (which can be similarly free where most of the action is in the audience's imagination) so there are transferable skills, and it will invigorate your visual sketch writing as you stretch your imagination. Plus if you want to write for Newsjack or other open door radio shows, or are looking to start your own comedy podcast with scenes and narrative then this will give you all the tools you need.

* write lots of new, surprising and imaginative sketches. Explore a range of inspiring starting points for sketches including making use of radio’s ability to easily conjure up far flung and extreme locations, personification (or anthropomorphic) sketches where animals and things come to life and parody sketches where sound effects and music can conjure up things like the news or a big budget drama to be lampooned.

* get professional, helpful and inspiring feedback on your work

And there is also the opportunity to write, perform and record radio sketches at home as there is also an optional recording/production dimension. So it’s great too for audio enthusiasts and people looking to make comedy sketches for podcasts.

We will also cover:

* The specific demands and opportunities of radio comedy.

* Formatting radio sketches and an introduction to the industry.

At the end of each session the homework task will be to write, and optionally to record too, a sketch where you work with the comedic techniques we have explored in the session. There will be a number of options as to the subject/angle of the sketch to get you started – and you are always welcome to go in a different direction if you are inspired to.

By the end of the course, you’ll be set up to write and record your own sketches and also you’ll be in a stronger position to submit sketches to radio shows that invite submissions.

More information on the course

SESSION 1
BACKGROUND, THE INDUSTRY & SOUND EFFECTS
This week we’ll discuss how a lot of great TV comedy shows started on radio and how ironically one of the main routes into radio is performing live comedy. I’ll also point you to advice from the BBC about getting into radio comedy and will talk about the BBC Radio 4 sitcom I recently worked on. We’ll also look at how to lay out radio scripts and where to find templates and how radio recordings work, discussing the approaches of studio based or in front of a live audience. Our other main topic of the week is: SOUND EFFECTS ON RADIO. We’ll listen to and analyse example sketches from: Laura Solon & Katherine Parkinson, Mitchell & Webb, The Consultants. And we’ll discuss SOURCING AND WORKING WITH SOUND EFFECTS

SESSION 2
MUSIC IN RADIO COMEDY, META COMEDY, TOPICAL COMEDY
AUDIO RECORDING & EDITING
This week we’ll take criminals and villains as our theme for the sketches we analyse and write, and we’ll introduce news and current affairs parodies. This week we will listen to sketches from Blue Jam, Kirrin Island, Lee Mack and The Mary Whitehouse Experience, all of which will be about villains and criminals and will illustrate a range of ways of creating comedy on this subject. This exploration will also explore principles that can be used with any subject matter. We will also explore recording, editing and adding music and sound effects to a sketch – by making a sketch about a robbery in the session! And if you are new to audio editing there will also be follow up links to online Audacity tutorials, including an introduction, a one with a bunch of handy tips and changing voices in Audacity.

SESSION 3
DRAMA, DANGER & BATHOS - HOW RADIO CAN EASILY CONJURE UP EXTREME SITUATIONS
The theme of this session is extreme, remote and challenging situations and how easily they can be conjured up in radio with sound effects, dialogue and music – basically all situations that would be difficult to do if filmed. The comedic concept is BATHOS. Firstly this is simply where something is built up and then knocked down, and also we will look at how a dramatic scene, or one with grandeur, can be undercut with something ridiculous. You will create survivalist/ wilderness type scenes, bathetically undercutting the situation. Then we will also work with war scenes where again the very real danger is undercut with absurdity in some way. Shows we’ll listen to for examples of this in action are Small Scenes, The League of Gentlemen, Cowards, Hitchiker's Guide to the Galaxy and The Goons.

SESSION 4
JUXTAPOSITIONS, ANACHRONISMS AND UNDERMINING EXCITING CHARACTERS USING BATHOS
In the session we looked at cool and scary characters and undermining them bathetically, in particular working with punks and pirates! We’ll also bring in other kinds of music stars and other exciting types like spies and astronauts look at juxtaposing something banal or mundane with exciting characters, ‘deskilling’ them and working with pomposity and anachronisms. Examples of the techniques in action will be from the Million Pound Radio Show, Milk Run, Mitchell & Webb and John Finnemore’s Souvenir Programme.

SESSION 5
PERSONIFICATION & SURREALISM
This week explore we’ll anthropomorphic comedy – personifying animals and things – as well as surreal and bizarre comedy generally. Firstly, personification is a technique radio is particularly well suited to as all the images are in the listener’s minds and so don’t require costume and setting and these same qualities allow all sorts of bizarre situations and images to be readily conjured up. We’ll personify animals and objects, as well as working on mad absurdist comedy situations. Our clips will come from Mitchell & Webb, Cowards, the Mighty Boosh and the Goon Show. In this closing session we’ll also review where you can go next with your radio and podcast comedy work.