Russell Brand has appeared in the following 2 podcasts published by British Comedy Guide:

Global comedy superstar Russell Brand is studying for a degree, raising a new baby, and assembling a new two-year tour. An Essex boy with cosmic ambition, his art is obsessed... 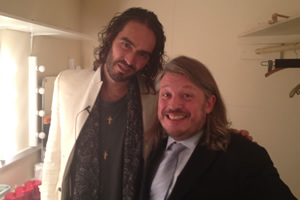 RHLSTP #21 - Russell Brand - Richard Carpenter Punishment. In a theatre that one suspects is stuffed to the rafters with journalists hoping to steal a scoop, Rich is left...