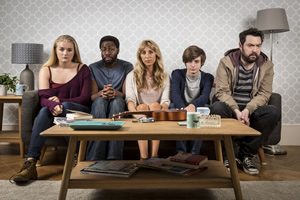 Uncle writers Oliver Refson and Lilah Vandenburgh explain why they are ending the sitcom after three series.

This is just a quick heads up to remind people to watch the third series of Uncle, which looks like it is going to build to a nice - or maybe not so nice? - romantic finale in a few weeks.

The third and final series of Uncle kicks off with a slice of emotional turmoil for Andy (Nick Helm). We all know that he has a nephew, Errol, but could he be a father too? The first episode finds him reflecting on whether his life if about to undergo a seismic shift that will mean that he has to accept some real responsibilities.

Uncle stars Nick Helm as an out-of-work musician who forges an unlikely alliance with his 12-year-old nephew. We spoke to Lilah Vandenburgh about her writing career, working with co-writer Oliver Refson, their writing process and Uncle's development and evolution, including loads of useful advice.

The only comedy that felt vaguely fresh last week was the newest show from BBC Three, Uncle.

I feel the strength of Uncle comes from the chemistry between Nick Helm and Elliot Spencer-Gillot, whose awkward exchanges really liven up what could be quite an ordinary show. Oliver Refson's script does have some memorable moments, however I personally felt the more tender segments made the sitcom rise above the usual BBC Three fare. Though the final act of episode one was a little over-sentimental, it did make me feel that Uncle was a full-rounded show and wasn't just a one-note comedy.

In addition there are some fantastic support performance most notably from Con O'Neil who appears to be having a ball as the strip-club owning transvestite.

I'm just hoping that future episodes of Uncle have the same mix of lowbrow humour and realistic moments that this opener had because, if it does, BBC Three could have another comedy hit on its hands.

The latest 4Funnies pilot stars standup Nick Helm in his acting debut. Oliver Refson has written and directed Uncle, in which Helm plays Andy, an out-of-work musician charged with looking after his 11-year-old nephew Errol on the day he hoped to kill himself. Typical. The simple task of taking him to football practice, though, spirals into a bizarre adventure for the pair, involving a faked injury, a car crash and a trip to a gay club. Oh, and lies. Lots of lies.