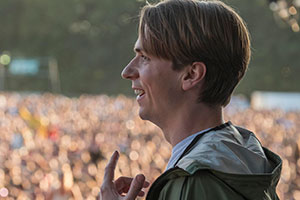 An interview with the director and star of new British comedy film The Festival. 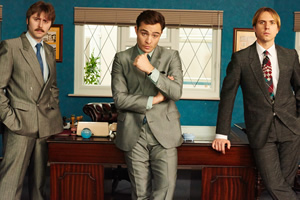 Writer Damon Beesley and actor Joe Thomas talk about BBC Two sitcom White Gold. Considering it shares many of the cast and crew, is this new show similar to The Inbetweeners?

Joe Thomas talks about the new series of Fresh Meat, and how his character Kingsley has changed.

Joe Thomas to star in 'What's In A Name?' tour

Inbetweeners star Joe Thomas will take the lead role in the first UK tour of What's In A Name?, the stage show based on the hit French format Le Prènom.

In the penultimate episode of the series, we witness the invention of the bounce stabiliser, listen to delicious dust, and see a terrible remake of The Human Centipede.

This week we come across the power of ice, flashbacks in sand, and the most unlikely cheat in the history of Taskmaster.

This week's Taskmaster has been marked with a touch of sadness following recent news concerning Paul Sinha.

In this week's edition we learn that one of the biggest elements of Taskmaster is diversity. One point you may be riding high with your ability to remember a deck of cards, the next you are wallowing in misery because when trying to hide yourself you failed to cover your own face.

Only the Taskmaster comes out on top when deceiving.

Tonight's episode was a reminder that some of the best moments in Taskmaster come from the most unexpected places. Let's face it, before any of this, who thought you could get laughs by introducing a toddler to tray containing rubber ducks and a thresher shark, in order to teach it about the dangers faced by animals in their natural habitat?