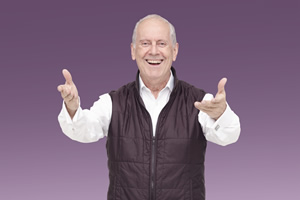 He took eyebrow-acting lessons from Roger Moore, became a jumper-clad TV presenter then a high-ranking whip in John Major's government, where he changed marriage forever. Now Gyles Brandreth is on tour, but one topic is off the table. "If I mention Brexit during the show I give everybody their money back."

Radio 4 will pay tribute to Just A Minute host Nicholas Parsons with an evening of programming on Saturday 10th October.

Gyles Brandreth made a Covid-19 joke on This Morning, amusing Eamonn Holmes, but some viewers said it was in 'bad taste'.

The Kurupt FM Podkast has won in the Best Comedy category at the British Podcast Awards. Other winners include Rule Of Three, The Rob Auton Daily Podcast and Shagged. Married. Annoyed.

Esther Rantzen (quite rightly made a dame for her services to broadcasting and charity) thinks that her friend and mine, the late great Nicholas Parsons, should have been given a knighthood. I rather think Nicholas thought so, too.

Nicholas Parsons has been admitted to hosptial

Nicholas Parsons is recovering in hospital after missing a recording of Just A Minute earlier in the week. The 95-year-old has also dropped out of the remaining chat shows in his Edinburgh Fringe run, with Fred MacAulay taking his place.

Nicholas Parsons has missed hosting two episodes of Just A Minute, reportedly due to a bad back. Gyles Brandreth stepped in as guest host.

Comic, 95, said to be suffering from a bad back

A number of comedians are due to guest star in Whodunnit [Unrehearsed], a new murder mystery spoof coming to London's Park Theatre.