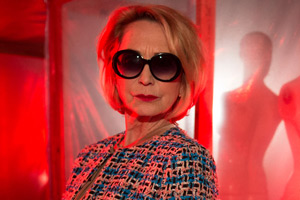 Felicity Kendal - Inside No. 9 interview

Felicity Kendal talks about playing a "crazy blind woman" in the Private View episode of Inside No. 9.

A show that gently sends up the English middle class is built on a sharp script and consummate acting.

Felicity Kendal: 'I struggled with my temper'

The actor, 72, on arguments with her ex, how she dealt with stalkers and missing out on 60s hedonism.

What I'm trying to say is that Inside No. 9 is remarkable. And series three has perhaps been its most remarkable series yet.

Preview - Inside No. 9: Private View

Who would have thought that the star of one of Britain's most famously loveable sitcoms would star in one of the darkest comedies around?

Inside No. 9 Series 3 cast revealed

Casting has been revealed for Inside No. 9 Series 3, including Felicity Kendal, Mathew Baynton, Philip Glenister and Morgana Robinson.

Felicity Kendal reveals she had affairs

Felicity Kendal reveals she had affairs when she and couldn't be more different than her The Good Life role.

I try not to do regrets - I think they're such a waste of time - but I now have one. Not having kept in closer touch recently with Richard Briers, or Dickie as I used to call him, is a real sadness to me now that he has gone.

A look at the Silver Jubilee Good Life performance

At the conclusion of the myriad of events surrounding the recent Queen's Diamond Jubilee celebration, I started thinking back to the Silver Jubilee in 1977 when Her Majesty and Prince Philip, the Duke of Edinburgh, attended a taping of an episode of The Good Life (Good Neighbors in the States), starring Richard Briers, Felicity Kendal, Penelope Keith and Paul Eddington.