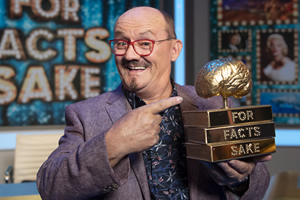 Mrs Brown's Family Handbook, an illustrated hardback book linked to the hit BBC sitcom Mrs Brown's Boys, is to be released this autumn.

Brendan O'Carroll, aka Mrs Brown from the hit BBC sitcom, talks about his plans for Christmas and the third series of the sitcom.

All Round To Mrs. Brown's news:

All Round To Mrs. Brown's faces axe due to covid

Mrs. Brown's Boys' spin-off series All Round To Mrs Brown's faces the axe due to coronavirus restrictions, it has been reported.

The comedy actor and show chief, 65, faces claims of constructive dismissal and workplace discrimination after a row over pay.

Gary, 41, who quit the sitcom in the ­autumn, says he is also taking legal action against the BBC.

It wouldn't be Christmas without a visit (or two) to the Brown residence, says Helen Daly.

Mammy Of The People is a reminder of just how gruesome Brendan O'Carroll's long-running comedy is.

Love it or loathe it, the Christmas juggernaut rolls on - but this year's special had a serious emotional message to deliver.

Mrs Brown's Boys has been renewed up to 2026, the show's star Brendan O'Carroll has said.

Brendan O'Carroll has been accused of lying about Gary Hollywood's exit from Mrs Brown's Boys in a bid to save the BBC comedy show. Over the weekend, Brendan told fans Gary was leaving for personal reasons and dismissed rumours of a rift between them. However, an insider at the show has now spoken out to slam Brendan's version of events and has claimed there has been a 'big money dispute' behind the scenes that has left other cast-members scared to speak out.

The 64-year-old comedy star was alongside his sister Fiona - who has been dubbed Brendan's "second mammy" - when she passed away in Canada in March.