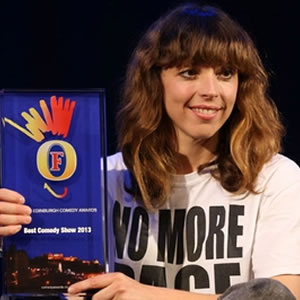 The results of the Edinburgh Comedy Awards 2013 have been announced.

Bridget Christie (pictured) has been awarded the main prize, with John Kearns named as Best Newcomer. The panel prize has gone to Adrienne Truscott.

The results were announced at a ceremony at the Edinburgh Fringe by last year's winner Doctor Brown alongside Alan Partridge: Alpha Papa star Steve Coogan (who won himself in 1992, when the prizes was called the Perrier Awards).

Christie, who has been performing A Bic for Her at The Stand Comedy Club for the month in an unconventional morning slot, has based her show around the topic of feminism. The comedian has picked up rave reviews during the festival and was widely considered to be the front runner in advance of the announcement.

She accepted her award wearing a 'No More Page Three' t-shirt, and joked "I didn't think I'd win but I've prepared a very long speech just in case..." She went on to praise all the "incredible women" performing at the Fringe.

Christie, who is now working on a second series of her feminist Radio 4 stand-up show Bridget Christie Minds The Gap and a book, will be performing a run of the show at the Soho Theatre in London.

Awards producer Nica Burns commented: "Whilst high on the laughter count, Bridget Christie's show about feminism also gives us something to think about. An outstanding hour amongst an extremely strong shortlist."

Christie is the third solo female comedian to win the main award. She follows in the footsteps of Jenny Eclair in 1995 and Laura Solon in 2005. 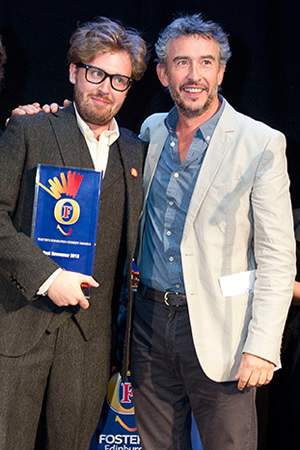 Notably, the other two winners are both performing free shows. John Kearns' surreal hour titled Sight Gags for Perverts is part of PBH's Free Fringe, whilst Adrienne Truscott's Asking for It: A One-Lady Rape About Comedy Starring Her Pussy and Little Else! was performed at Bob's Bookshop under of the 'Heroes Of Fringe' banner.

Kearns said: "I honestly couldn't have done it if it wasn't for the Free Fringe. I wasn't in the Big 4 programme [the publication published by the bigger venues], so what does that say? It doesn't matter. I have no representation or PR."

The comedian also used his time on stage to make a statement about agents and the industry. He said: "There's a lot of people here I've had meetings with and they didn't want to sign me... well, fuck them. They are all asking for meetings now... well, go fuck yourself!"

The judges picked Adrienne Truscott's show for the Panel Prize as they described it as "a brave and bold show that hilariously embodies the spirit of the Fringe." The comedian, who normally performs as one-half of the Wau Wau Sisters, had not tried stand-up before the festival, yet this year put on an individual show which examines the culture of the rape joke. Described by panel chair Tania Harrison as "brave, brutal, bold and beautiful", the show sees Truscott performing for much of the time with no clothes on from the waist down. The comedian has already won the The Malcolm Hardee Award For Comic Originality at the festival.

This year the prize money from sponsors Foster's is £10,000 for the Best Show, with £5,000 each for the Best Newcomer and the Panel Prize winner.

This year the discussions over the shortlist for Best Comedy Show went to an unprecedented second vote, resulting in a seven strong nominees list. The other comedians in contention for the main prize were Carl Donnelly, James Acaster, Max & Ivan, Mike Wozniak, Nick Helm and Seann Walsh.

The judges and scouts saw record-breaking 578 eligible shows this year to obtain the shortlist. It should be noted not every comedian performing at the festival is seen by the panel though - the rules state that acts considered to have 'star' status are not eligible to win an award.

Speaking at the shortlist announcement, awards producer Nica Burns said: "In complete contrast to last year, 2013 will be remembered as the year of the stand-up with an exceptional laugh count. This year's shows all combine great writing and outstanding performances with subject matter ranging from feminism, settling down, sky-writing, cats, love, life, lie-ins and the dangers of school reunions.

"The newcomer's shortlist are the stars of tomorrow. A wonderful new generation of comedians who will make every corner of Britain laugh."

To find out more about the Edinburgh Comedy Awards and see the list of previous winners visit comedyawards.co.uk

Some of the comedians explain how they first heard the news they'd been nominated: