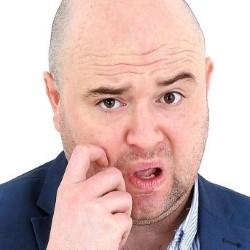 See That Bloke Who Does Voices where impressionist Danny Posthill tells us about how Johnny Vegas helped him get over his anxiety, the incident of Dianne Abbot blocking him on Twitter and why Donald Trump could have a rap album after his presidency; there may just be a musical about Trump too. Find out how Ant and Dec could be football managers and how doing impressions drives Danny's fiancé mad. You will also see why Brexit should have been dealt with in an ABBA medley.