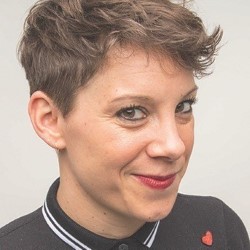 If you don't have anxiety, I don't think you're concentrating! Suzi is worried about everything - from someone breaking into her flat, to human rights across the globe, to her cat's quality of life - and it's keeping her awake. Following last year's critically acclaimed, sell-out run, this show is not to be missed. 'Excellent hour of stand-up' **** (Sunday Times). 'Emerging star' **** (Scotsman). 'Flawless stand-up machine' (List).

This is a great hour of pure stand-up from Suzi Ruffell that will resonate with anyone else who dreads 'organised fun'. Her un-mawkish look at anxiety and at gay representation in the media keeps the laughs flowing while making a serious point, plus it turns out she has a lovely singing voice!