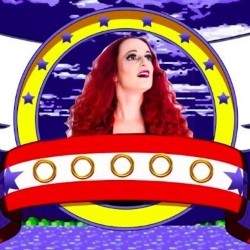 Award-winning stand-up Sooz Kempner spent the 90s playing Sonic, going from a little kid to a fully grown teen. But did the 90s map out her entire existence? And will she coast through life or will she try to complete it with all the Chaos Emeralds? As seen on BBC Three, ITV2 and Comedy Central. 'Fantastically funny' **** (Chortle.co.uk). 'An absolute joy' **** (Fest). 'Delightfully shambolic' **** (FunnyWomen.com). 'Very snazzy trainers' **** (TheReviewsHub.com).

After last year's film-themed treat, Sooz Kempner takes us through another influential facet of her upbringing: video games. And so much more: there are Skyped-in characters and oddly compelling parking pictures, exasperating misspellings and at least one epic song. An under-sung talent in top form.