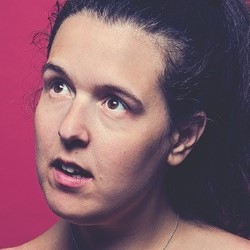 Rosie Jones is a comedian with a penchant for being mischievous. Her cerebral palsy doesn't slow her down in the slightest. Catch her before she wobbles her way to stardom! As seen on 8 Out Of 10 Cats and Silent Witness. Finalist: Leicester Mercury Comedian of the Year 2018, Amused Moose Comedy's National New Comic Award 2017. 'It's rare to see a comedian who exudes such joy' (Steve Bennett, Chortle.co.uk).

As she warmly greets the audience with a bowl of sweets, Rosie Jones looks like butter wouldn't melt in her mouth. Truth is, it would sizzle. This is very funny debut hour on disability and sexuality from an assured performer. You'll never look at Ryan Gosling the same way again.