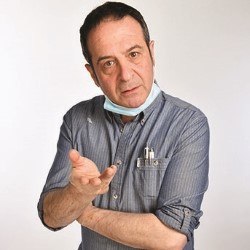 Mark Thomas is 54, the NHS is 70, UK national average life expectancy is 84. If Mark makes it to 84, the NHS will be 100 - what will they both look like? Based on a series of interviews with leading experts in and on the NHS, and residencies in hospitals and surgeries, and with director Nicolas Kent, Mark uses his own demise to explore the state we're in. What's going wrong in our NHS, how it can go right and what the future might hold for all of us.

Mark Thomas is in the 'theatre' section these days, but his latest high-concept epic is still heavy on laughs, as well as drama: he goes behind the scenes at various outposts of the health service frontline, from spellbinding scenes at A&E to some hilarious predictions from his local doc.