Back in 2015 I interviewed Mark Thomas a few weeks into the Edinburgh Fringe, and - just as an aside - got him to tell us what he'd been to see: and it was all brilliant. Makes sense to do that again, then.

Now firmly re-installed as a Fringe stalwart (he took a break, as we'll find out), Mark is at the Traverse Theatre this year with Check Up: Our NHS @ 70, which follows him to various invariably hectic bits of the health service. It's eye-opening, sometimes hugely dramatic stuff. We'll have a proper chat about the show itself with him when his next run of it begins, post-Fringe: this is a show that should be seen by as many people as possible, of all political persuasions.

Right now though we'll take a good long look at his Fringe experiences, this year and beyond, having met at a rather nice Edinburgh café called Lovecrumbs, early on a rainy Fringe morning. 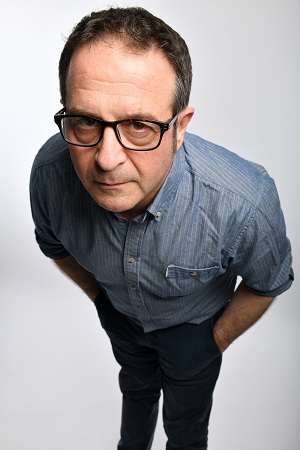 When did you first come up?

The first time I came to Edinburgh I was 19, I came as a student and wanted to see things - I absolutely adored it. I went to see 784 England which was radical socialist theatre: they were performing in Edinburgh Bus Station canteen, and it was brilliant. We went to see some Brecht that was a bit crap, went to see Ubu Roi, by Alfred Jarry, which we sneaked out of during the blackout.

It was amazing, utterly amazing. Two years later I came up and directed my mate's play, we did it at what used to be the Gilded Balloon on Cowgate, before it burned down. That was really interesting, we got about 20 people a day, then went round seeing all these other performers.

So when did you first perform at the Fringe?

The first time, a guy at a club asked me up - he was going to run a clubnight, not many people turned up so I didn't do the gigs, but I got to see loads of stuff. The second time, Paul Merton broke his leg, was in Edinburgh Royal Infirmary, got a blood clot, had to be on morphine, cancelled his run. So someone said "I'll fly you up here, pay you £50 a day if you do his slot, so we've got something on."

Then I came up with Ivor Dembina, who was the first person to run the one compere, three comics type show. There was me, Jo Brand, that was our first full run and I completely adored it. Then I started doing my own one man shows.

What was the aim of doing those longer shows back then?

At that point it was about being able to write an hour, and a good hour. The thing about it, we used to come up when we first founded The Cutting Edge: me, Kevin Day, Bob Boyton, people like that, and the idea was that you'd try something new - a new format.

Then I left it a few years where I didn't really perform much at all, during the telly years, I wasn't really interested - but I became obsessed with how you tell the stories, and it kind of set the keynote for how I do things [now]. Which is that you go off, you have an adventure, you come back and tell the story.

I used to love the fact that when we did the TV show we'd write the script on Friday and Saturday, perform it on Sunday. We'd have people's right-to-replies coming in at the last minute, lawyers sitting at the side of the stage, giving me legal notes, how I could phrase things, how I couldn't phrase things, literally minutes before I walked on.

I suppose you were more equipped for that than most: you walk on a comedy stage, anything can hit you. Literally.

That's true. The next real big [live] show for me was 2003, when I did the Sudan show, that was all about how you make a comedic story on stage, taking people through this narrative arc of political action, various examples of how you work together, the idea of solidarity, what it means. I did two shows here, and I thought 'ah man, I've got to come back.'

Throughout the telly years I'd always come up, I'd be speaking at the Festival of Politics or at the telly festival or what have you. I used to come up and do The Bongo Club, which was down on Holyrood. It was an amazing club down there, a nightclub, but it was great. It had some real radical roots in the community, so there was a real purpose to being there, the club and the ethos of it. We did shows about Coca Cola, the arms trade, all this kind of stuff.

And from then on it was 'ok, how do we reinvent this?' and Edinburgh's a very good way of doing that. Jt's not the only way, because this is the third show I've written in 14 months. Two of them were fucking great and one of them was alright, so that's not a bad average. 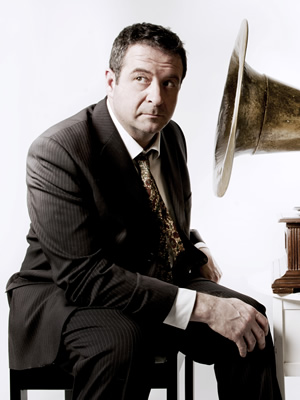 I suppose your opera show [Bravo Figaro] started at such a grand place - The Royal Opera House - that you could be as theatrical as you like after that.

Absolutely, that's where it came from. Actually it was the 2003 show about Sudan that went 'bang - there's the narrative arc.' Then Bravo Figaro went 'bang - here's what you can do theatrically.'

The new show has a surreptitiously clever set.

It's all about 'how can you represent different voices on stage?'

In Bravo we recorded my mum and dad, and we had the lights that went on and off when they speak. Cuckooed, we did cabinets that come out, where I show conversations I had. Then The Red Shed, we had masks and recordings, and I love the idea that you invite the audience up - because that show is all about community.

And here, how do you represent people? So half of it is through verbatim and mimicry. And part of it is you see them, and sometimes hear them.

One novel thing with the Traverse Theatre, each show is at a different time of day: does that mess with your energy levels?

Actually my favourite thing this year: I did a 10 o'clock show in the evening, then my press day was the next day at 10am. By the time the afternoon hits, you're wiped out. But I saw at the Cameo Cinema the 50th anniversary of The Producers. So I plonked myself down there, and I've been giggling away at memories of it ever since.

You forget how amazingly brilliant it is. Kenneth Mars, there's one moment where he walks past Zero Mostel in the lobby of the Broadway theatre, it's the opening night, and Kenneth Mars' character, this playwright, says "Today, Broadway. Tomorrow...?" It's beautiful! 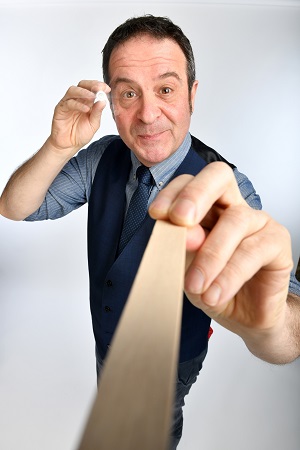 I went to see the Barber of Seville, which is by Théâtre des Champs-Elysées. It's just great, and the thing about it, if you've got good singers, the music does a lot of the work. But what they've done is, they've done proper comedy, it's not opera comedy. It's not just [haughty voice] 'Oh, the doctor has dropped his monocle in the harpsichord.'

But you can't beat good singing - and they were good. That's the only time I've done all the ovations at the end, all the clapping and bows - I just thought they deserved it. Usually at opera they all start clapping and you think 'oh this is a fucking rehearsal for the Tory party leader's speech - just keep going everyone.'

I saw Ken, about Ken Campbell - see it, it's really good, funny and tender, it leaves a big old hole in you. Loved it. The guy playing him has really got Ken. It's remarkable.

Other things I've seen: Underground Railroad Game, which I loved. It's in my top five new bits. It's an American play about race and power, really unexpected and very challenging - one of those things that stays with you. And the performances are really something else. That's at the Traverse.

The other one is Ulster American, which I really liked - loved the transgression. I think that's really important as an artist and creator, to be transgressive. It's really funny, and it'll offend nearly everyone - it's a Jerry Sadowitz of a show. It pushed so hard on the notion of a dominant culture speaking for others. There are arguments 'is it misogynistic, does it go too far?' but I look on it like a Tarantino level: they dropped hints throughout the play, that this is an intellectual revenge story for a woman.

Class is really good, at the Trav - one of these shows that's tightly written, brilliantly performed, and really fucking deft. Lots of twists as well.

Another show I loved is The Political History of Smack and Crack: really good performers, writing, and direction.

And Trojan Horse is great. That's about the Trojan Horse schools in Birmingham [an alleged campaign to 'Islamise' certain schools]. I was with a young British Muslim woman, wears a headscarf, she's a performance poet, she's never really been to theatre before, and she was on her feet. She said 'it spoke to me, I've never really seen me up there before.' Which is really exciting. So that was amazing.

There's a funny old thing: live performance, stand-up or theatre, complete strangers will talk to each other about what they've just seen. It doesn't really happen with any other artform. And that in itself is remarkable.