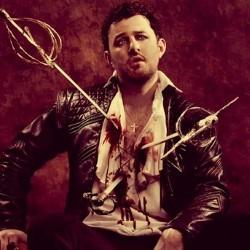 Don Rodolfo is a total butthead, a shameless libertine and the greatest swordsman the world has ever seen. The grotesque love child of Don Juan and Don Quixote takes you on a journey through his conquests, his adventures and every stupid thought in his idiot head. Returning to Edinburgh with his debut solo show, Ciarán is a character comedian and member of the critically acclaimed sketch group BEASTS. As seen on Drunk History (Comedy Central), Josh (BBC One) and GameFace (E4). Directed by Tom Parry. 'A ludicrous delight' (Telegraph). 'Greatest of the fools' (Scotsman).