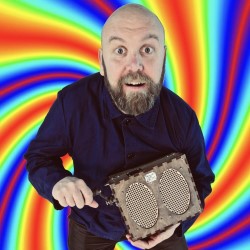 'Everyone should spend an hour with Bob, loveably chaotic master of one unique Fringe experience after another...' (List). This year Bob's got a new toy made in Russia by a man called Sergey. Anything can happen if you let it. Winner of Edinburgh Comedy Award Panel Prize for Spirit of the Fringe. Also: Chortle Award for Event of the Year, Barry Award for Person of the Fringe, Leicester Comedy Liberty Award, TVBomb Zeitgeist Award and nominated twice for Malcolm Hardee Award for Comic Originality... 'A nightmare living the dream. Amazing...' (GlasgowLive.co.uk).