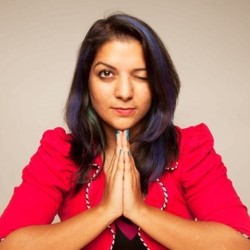 All the way from India, Aditi's Edinburgh debut explores how her place in our global village makes her feel she belongs nowhere and everywhere at the same time. Confusing for someone who's always been the village idiot, no matter how global it is. A show packed with her trademark 'acerbic and cutting edge' comedy (Mumbai Mirror) and charming (possibly litigious) parodies of people she's met along the way. Aditi has appeared on every major English and Hindi network in India and starred in her own BBC Radio 4 series, A Beginner's Guide to India.