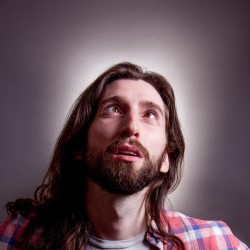 Jay Handley has set himself a task with this show title. It suggests he's going to shine a light on the nature of existence. That is always his ambition, of course, but mostly he did it for the sake of a pun. Not content with this, he has selected this press clipping to hint at his quality. 'Moments that can go toe-to-toe with the best stand-up I've seen' (EdFringeReview.com). His arrogance is contemptible. Someone did actually write that though! And he is shameless enough to capitalise on it.