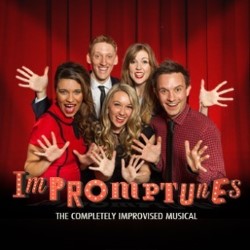 Improv performed on the following days in August 2016...

After sold out seasons down under, Australia's premier improv troupe finally brings its riotous comedy to the audiences of the Edinburgh Festival Fringe! The MC gets a title, and seconds later a never-before-seen musical begins. The only thing you know is that it will be full of highjinks, harmonies and hilarity. It's unrehearsed. It's unpredictable. It's a whole lot of fun. It's Impromptunes. 'An unadulterated concoction of excitement, danger and hilarity' **** (Time Out). 'The ultimate in slick improvisation' **** (West Australian). 'Improv gold. You'll leave with sore cheeks from laughing' **** (Herald Sun).