If you ever hear a comedian say, "comedy is the last bastion of free speech", run away immediately, or better still, ask them to define "bastion".

Many comics think they're boundary-breaking messiahs, but really they're every five year-old who stuck their finger up their bum because it was "naughty", now fully-grown into adults with souls and hands that will forever stink of that long-ago rebellious poop...

You can only really smash taboos if:

1. You're informed, funny and clever,

2. You're funny, clever and well-dressed.

Trust me on this, do your research or buy a suit, otherwise you're just a puppy dry-humping controversy (careful, it'll never love you back.)

How do I know?

I thank my mother. 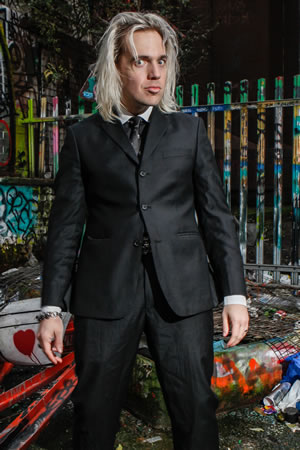 My mum raised me to be polite, well-dressed, and well-spoken. I am, however, tremendously rude, and a massive pervert. (I always speak clearly, though, so when I say, "fuck you" to my audience, it sounds absolutely incredible) and since I perform my perversions in a tailor-made suit, I can swing a whip in almost any formal setting. Isn't that nice?

A suit has meant I've avoided blistering my cock on the unyielding pants-leg of outrage, even though my work is peppered with suicides (actual) and salted with gimps (vinyl). Folks leave my shows feeling like they've learned something, or, at very least, like they'll be gleefully punished if they haven't.

And all it takes is a suit and a smile.

The suit gives power. People love power. They particularly love other people's power. Sadism taught me this. There's not a human alive who doesn't have an emotional response to being slapped in the face. (And if your cufflinks cut them during the backhand.... golly! Ain't no self-defense course gonna teach you how to fend off class.)

Here in the jolly old West, freedom of speech is everywhere; there's so much of it in fact that some folks think there isn't any, because other people disagree with them. "I hate political correctness" is a boring thing to say. Go with what you mean: "I call a spade a spade" - or better still - a whimpering, "Well... I'd really like to."

Is your "freedom of speech" really being silenced when nobody laughs, or do you just express yourself with all the finesse of a numb dong? You can say anything you want if you do it well, you just have to live with yourself. And people's response to you. And be mature enough to realise that not everyone who disagrees with you is a "hater", or whatever infantile nonsense it is you oversensitive joke-bitches say when the joke's on you and you don't like it.

A bloke in Brisbane asked me how I was "coping with all the censorship in the UK". I asked him what the fuck he was talking about. There's no governmental body cracking down on stand-up here, there's just how well you can dress up the turd that is your stupid opinion, stupid ambitions and heinous, craptacular art form.

You are, after all, a comedian. Don't sniff your hands, you know where they've been.

'John Robertson: Arena Spectacular!' is on at The Stand Comedy Club 2 at 3:40pm until the 28th August. Listing

John also presents The Dark Room which is at Underbelly (Cowgate) until the 27th. Listing