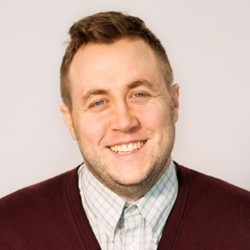 One of Amused Moose top ten shows of 2014, TT returns with another gleeful hour of comedy. An absorbing and affectionate love letter to family and hometown. Expect to have your funny bone tickled and your heart strings plucked. 'Master of storytelling' (PunchlineUK.wordpress.com). 'You might find yourself taking a paracetemol to kill the pain in your jawline afterwards' (ShortCom.co.uk). 'We forget the misery and cold of the outside as the Tom Toal comedy glow warms us all' (Kate Copstick). 'Touching addition to the Daniel Kitson-esque heart-on-sleeve comedy sub genre' (List).

Tom Toal returns to the 2015 Edinburgh Fringe with his most personal show yet with Sunshine on Bexleyheath.

Following on from last year's hit show Prequel, Tom's performances recount his real life experiences and have consistently been hailed for their honest narratives.

Having moved back to his hometown with his family in tow, this is a hilarious and moving show as Tom deals with the light and dark that life throws at us in his own unique way of viewing the world. Now a Dad, Tom has a new outlook and one that he is keen to share with his views on internet sexism, illness, travelling, his daughter's chances of making it as a battle rapper and will finally answer the question "What is love?".