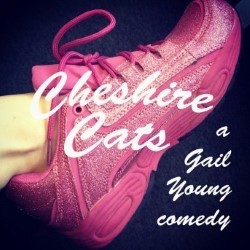 Fresh from their sell-out show in 2014 Edinburgh Fringe, Saughtonhall Drama brings Cheshire Cats to Edinburgh for its first appearance since its debut in 2006. This comic drama pays tribute to charity walkers, race organisers and marshals everywhere. The Cheshire Cats are a group of six women who plan to speedwalk their way to fund raising success in the Moonwalk. Trainers and wildly decorated bras are in, high heels and designer labels out. However a last minute substitute to the team doesn't meet the physical criteria!