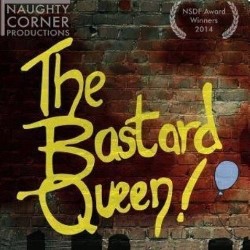 Returning NSDF award-winning show (2014) The Bastard Queen! is a pitch black comedy. Set in a post-apocalyptic world, this twisted story follows the survival of the last five people on earth. Littered with witty musings, laugh-out-loud comedy, even touching, human moments. This emotionally dynamic production tackles topics ranging from the mundane, to starvation, and personal intimacy. The end is near, survival instincts go into overdrive, but humanity ensues, allowing them to relish in their imaginations and empathy for humankind and looking on the brighter side of life. After all it is the end of the world.

The Bastard Queen is an award winning, pitch-black comedy which made its debut as a Naughty Corner Production at the Edinburgh Fringe 2014. In a post-apocalyptic world, this dark and comical story follows the survival of the last five people on the planet.

Everything is gone. Everyone. Four lone survivors, banded together by uncertain events struggle through life - or what is left of it. Then on a day as bleak as any other, a stranger arrives from the nothingness and disturbs the fragile balance of the group. Each member is forced to face themselves, each other, and overwhelming events that ensue. Albeit with the aid of umbrellas and shoes.

The play is littered with witty musings, laugh-out-loud comedy, and even touching, human moments. This emotionally dynamic production tackles topics ranging from what defines being 'up' in the morning, to starvation, to personal intimacy, all with a comical twist.

Co-written with Jemma Lynch and directed by Mikee Dickinson, this production will push the boundaries of black comedy. With Mikee and Jemma's unique writing, and performances from a talented cast, including Phil Bulman (Not The Horse), Jemma Lynch (Widows), Megan Bond (The Dybbuk), Kate Brady (The Country) and the new addition of Calun Griffin (Florilegium, Not The Horse). Additional technical and production work also by Tom Lyth and Tom Silverton.

'The end' is catching up with them, and with only their imaginations, endless rubbish and a grail-like find to entertain them, they decide to look at the brighter side of things, after all, it's only the end of the world.

Naughty Corner is a new Theatre Production Company that debuted at Edinburgh Fringe Festival 2014. Their first show began as a dissertation piece between five drama students at Edge Hill University. From this, the idea of a post-apocalyptic comedy was conceived, and The Bastard Queen was born. The company won the National Student Drama Festivals - Edinburgh Award 2014, with The Bastard Queen. The play has since been performed at The Lantern Theatre Liverpool and London's Pleasance Theatre (Islington).