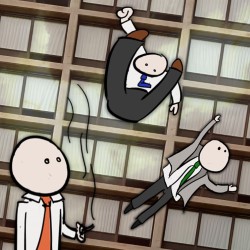 Live Love Life Insurance believe Victoria is dead. She begs to differ, and intends to fight for her right to a policy. But that means taking matters to the top, which threatens both her business and life (insurance). Based on the tragedies of the Greek underworld, and the struggles of dealing with customer service, A Matter of Life and Debt is an absurd comedy about little people jumping through the loopholes of big business. Relish Theatre makes its Fringe debut in 2015 with this brand new absurd comedy.