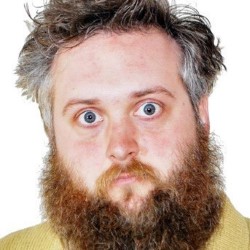 In his debut show at the Edinburgh Festival, Leicester Mercury Comedian of the Year nominee and winner of Dave's Leicester Comedy Festival Best Debut 2015, Phil Jerrod unravels the mess that is modern life. Come and watch this eloquent bearded weirdo persuade you there's really not that much to worry about after all. As seen at the Pleasance Reserve 2014. 'A comic whose instinctive mastery of his form immediately marks him out as one to watch' (Guardian).

In his highly-anticipated debut Edinburgh show Neanderthal, hotly tipped newcomer and eloquent bearded weirdo, Phil Jerrod, will be unravelling the mess that is modern British life.

Leicester Mercury Comedian of the Year nominee 2015 and winner of Dave's Leicester Comedy Festival Best Debut 2015, Jerrod will be ranting against the daily frustrations we're all up against these days. Neanderthal man only ever had two worries - food and Tigers. Now look. Smart phones, Facebook, space monkeys, vampires, pensions, The Beatles, lasagne - how can we possibly keep up.

His passionate wisdom combined with occasional surreal flights of fancy, make for an hour of truly unique, intelligent comedy. Jerrod holds a mirror up to society today to see what's expected of us and how we're coping, compared to Neanderthal man and those baby boomers, the 'jackpot generation' who had is so damn good.

By the end though, Jerrod helps us to realise there's really not that much to worry about after all.