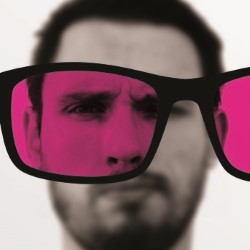 Last year I used the word Schadenfreude in my description, and it seemed to frighten off dumb people as I had lovely audiences. This year I'm using the words Australopithecus Afarensis, in the hope it happens again. Paul Duncan McGarrity returns with his third solo hour. After looking at himself in Awkward Hawk and the positive side of failure in Fail!, this years show looks at why we revere the past and why we are absolute fools to do so. 'Like a very tall, funny, excited child' (Scotsman).

Paul Duncan McGarrity has slipped under the radar but with a strong twitter following and faith in the intelligence of the audiences of Edinburgh, he returns to the Free Fringe with his third solo hour.

Last year Paul used the word 'Schadenfreude' in his show description and it seemed to frighten off dumb people as he had lovely audiences. This year he's using the words Australopithecus Afarensis, in the hope it happens again.

But why does Paul keep coming back? What makes us all turn to the places and the patterns of behaviour that we find comforting? After looking at himself in his previous shows, Awkward Hawk and the positive side of failure in Fail!, this year's show looks at why we revere the past and why we are absolute fools to do so.

Organisations like UKIP and the Daily Mail use Nostalgia to sell their thoughts and policies. But surely Nostalgia is pointless because it's based on a history which isn't factual but interpreted.

Paul is perhaps more physically connected to the past than many of us, being one of the only professional archaeologists performing stand up comedy in the UK. As such his experiences of digging up nearly 2500 skeletons on the London Crossrail development and the way in which the commenters on the Daily Mail website reacted to that is pretty unique... He'll tell you all about it.

But what of history is true? Can we separate historical fact from nostalgic look back? Should we?

This show will go down in history. Paul is making sure of that as every show will be recorded for posterity by a chosen 'audience historian'. Just what did happen in that room? What are the facts? Can the written history be trusted or will it be a nostalgic interpretation of the truth?

Originally a member of the critically acclaimed improv troop Deadman in a box, (Undeniably sharp, well-oiled and impressive' Such Small Productions) Paul began performing stand up in 2009 and since then has been combining his day-job (often in a hole with the odd dead body) with his growth from strength to strength on the UK comedy circuit (with gleefully alive and laughing audiences) reaching the final of the prestigious Amused Moose Laugh Off 2011.