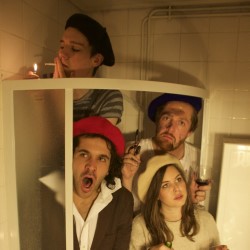 This show is like a cake, not a cake made by hand, but by a second hand cake maker that was bought at a car boot sale in Bognor Regis from a man with brown hair and a lisp. Luckily there are no s's in cake maker. The baker was an old poet who woke up one day and his plant had died. He sent a piece to Obama who wrote back saying he enjoyed it even though he doesn't like strawberry cake. It wasn't a strawberry cake, so we didn't understand the message.