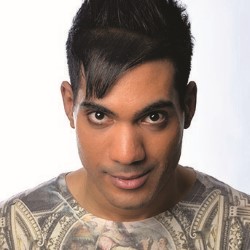 Brought up by his Egyptian mummy in deepest Wales, Omar's childhood was full of mysteries: How did men ruin everything? What's love? Why's depression such a downer? Almost entirely constituted of energy, enthusiasm and wit, Omar excavates the mummy issues of the lesser-spotted Egyptian-Welshman. Omar is Russell Kane's tour support. Credits include Seann Walsh's Comedy Spectacular and Free Speech (BBC Three), regular Radio 2 appearances, and Philosofa (podcast). 'What the comedy scene has been crying out for' (Daily Telegraph). 'Smashed it like a ceramic plate, every night of the tour' (Russell Kane).

Omar Hamdi (as seen on BBC Three and heard on BBC Radio 2) will be performing his debut stand-up show In The Valleys of The Kings.

Growing up with an Egyptian single mum in Wales let Omar ponder all the big questions: What is depression? Have men ruined the world? Is love real, or is it our most destructive invention? Are Islamic State just lads on tour? And how can he make his mum proud?