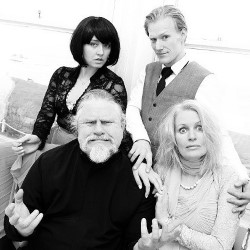 Presented by M+E Theatre. With sell-out Fringe productions including The American, the Coloured and Me: 'It is thought provoking and makes the audience feel uncomfortable, something that is both rare and affecting' (ThreeWeeks). Mary and the Stripper: '...a sharply told tale with a positive message' (Reuters.com). Storm in a Teacup: 'Chilling' (Miles Keaton). M+E's version No Exit? places Sartre's characters, who think they are in hell, at heaven's gates... Directed by Michelle van Rensburg, with Melissa Woodside, winner of the Royal Reed Award, as Inez and Sean Higgs as Garcin.