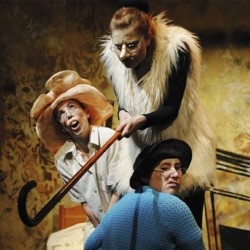 Storm in a Teacup, devised by Hot Coals. BSL incorporated, deaf accessible performance. Three old sisters, one birthday cake, buckets of tea and good old anarchy! This darkly comic and cartoonish piece delves into the quirky and tender world of three sisters in their 80s, fighting the system to keep their independence. 'A genuinely life-affirming show' **** (FringeGuru.com). With very little dialogue, the story is shared through beautifully choreographed set pieces to music, physical comedy, clowning and visual theatre. A fun, touching journey to share with the whole family. 'Superbly executed slapstick and farce' *** (WhatsOnStage.com).

Alumni of The Royal Academy of Dramatic Art's brand new post-graduate acting course, MA Theatre Lab, bring their successful show, Storm in a Teacup, to Spotlites for 10 days only!

Storm in a Teacup is inspired by Chekhov's Three Sisters, devised and performed by Hot Coals, and directed by Alice Robinson.

This darkly comic and cartoon-like piece is a window into the quirky and tender Chaplinesque world of three sisters in their 80s, as they fight the system to keep their independence.

In a world where words have lost their place, physical comedy, walking sticks and false teeth come to life. No previous experience of Chekhov required!

Hot Coals have created a moving and relevant piece, tackling head on the issues that affect us all in our old age.

This production has no dialogue and shares its story through beautifully choreographed set pieces to music, physical comedy, clowning, physical theatre and larger than life characters. There is a small amount of pre-recorded text, which is brought to life on stage by an actress using BSL. This is not a traditional BSL interpreted show, but a new take on accessible theatre where the deaf and hearing enjoy one shared experience.

Storm in a Teacup is a fun and touching journey through afternoon tea rituals, birthday cakes and chamber pots, to be shared with the whole family.

Hot Coals is an ensemble of performers dedicated to creating exciting new work through devising. They aim to make physical and visual theatre that is accessible to both deaf and hearing audiences alike.

Core members Clare-Louise English, Margot Courtemanche and Jo Sargeant met whilst studying together on the first ever year of MA Theatre Lab at RADA. This exciting new course, still in its infancy, explores physical and devised theatre and is taught by RADA's core staff, plus guest tutors from established ensemble companies including Annabel Arden Co-founder of Theatre de Complicite; Ian Morgan of Song of the Goat; and Amit Lahav Artistic Director of Gecko.

Brief history of Storm in a Teacup

Storm in a Teacup was first performed at The Park Theatre, Finsbury Park, March 2014 and then went on to perform at Brighton and RADA festivals. In 2015 Hot Coals won Arts Council funding to take the show on rural tour for the Spring, May 2015 saw the show performing at Prague Fringe Festival before making its way to this year's EdFringe.