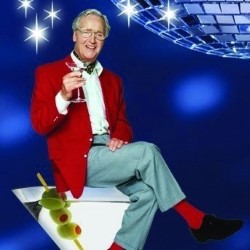 Celebrating 15 years on the Pleasance stage join West End, screen and radio star Nicholas Parsons for his most magnificent show yet! The host of BBC Radio 4's Just a Minute invites you to come and join the fun and laughter at his sell-out improvised comedy and chat show with a host of special celebrity guests. Past guests have included Jason Byrne, Michael McIntyre, John Bishop, Sue Perkins, Shappi Khorsandi, Gyles Brandreth, Micky Flanagan and Russell Kane. Not to be missed.

Celebrating 15 years on the Pleasance Theatre stage, audiences will once again be able to see the legendary West End stage, screen, television and radio star perform his most magnificent show yet!

The host of Radio 4's Just A Minute presents the pick of the festival to join him for fun, laughter and conversation. This sell-out comedy chat show always attracts a host of celebrity guests as well as new and exciting acts at the festival. Past guests have included Jason Byrne, Michael McIntyre, John Bishop, Sue Perkins, Shappi Khorsandi, Gyles Brandreth, Micky Flanagan and Russell Kane.

Nicholas Parsons' career in show business spans over fifty years. He became a household name in the 1960's when he teamed up with comedian Arthur Haynes on The Arthur Haynes Show in a partnership which was to last ten years. In 1965 he was voted Radio Personality of the Year from the Variety Club for his award-winning radio satire show Listen To This Space. In the late 1960s Nicholas also worked with Benny Hill as part of his comedy team on The Benny Hill Show and began presenting the Radio 4 hit Just A Minute, which he has now presented for over 40 years. More recently, Nicholas has featured in a number of West End musicals including Charlie Girl, Stephen Sondheim's Into the Woods and in the 90's two London seasons and three national tours in the cult musical The Rocky Horror Show.