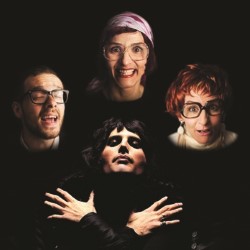 What do you get when you mix Freddie Mercury with a neurotic Jewish mother and her rabbi son with a childish secret? When nerdy Michael plans to marry the Brooklyn born, alopecia-ridden, lisp-inflicted and overweight Devorah, devastating rumours ruin everybody's plans. A true-ish, Jewish musical comedy which satirises religion, musicals and Queen in one foul swoop! Religious identity, forbidden familial and sexual relationships, betrayal and the power of gossip are all showcased through parody and popular music! A show not only about the extremes of Jewish life, but also the role of musical theatre itself.

A true-ish, Jewish musical comedy with chutzpah and heart - it's a kind of tragic!

Religious identity, forbidden relationships, and prejudice are explored through parody and pop. Experience an intimate glance into a bizarre world through this documentary style production.

Inspired by ITV's Strictly Kosher, Tammer Productions was formed to develop Mancunian Rhapsody. Following a sell-out run at the 2014 Camden Fringe this is their Edinburgh Festival Fringe debut.

Tommy Burgess is an actor, musician and songwriter. Previous credits include lead roles in How To Disappear Completely And Never Be Found by Fin Kennedy and short film The Kitchen Table. He is currently developing one-act play called All Of Me and writing Slit Throats & Petticoats, a horror musical.

Rachel Creeger directs new writing on the London Fringe, working with writers, comedians and actors to hone material and delivery. Writing credits include An Insomniac's Guide to Ambulances, Staffroom and several children's commissions. Rachel hosts comedy night Upstairs at the Adam & Eve! and is a founder member of the So & So Arts Club.