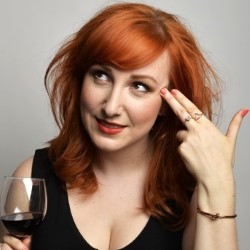 If at first you don't succeed, try online dating. Unless they start talking about their sex toys, then stop online dating. Despite her disastrous love life, Lydia King still has relentless faith in the goodness of men. Join her as she abandons her standards and takes you on an irreverent, frequently musical, and horribly hilarious romp through the most ridiculous dates you've never been on. Plus some bits about sex, insults, video games, and waxing. Mostly waxing. '...affable, deliciously crude and vivacious stand-up' (ViewsFromTheGods.co.uk).

Following a sell-out run at the Camden Fringe in 2014, newcomer Lydia King brings her debut hour of stand-up and musical comedy, Lydia King: A Date with Density, to the Edinburgh Fringe 2015.

Lydia has been on first dates with everyone on the internet. OK, not all of them. Just the ones who insist on talking about their sex toys. Or are married. Or have weird fetishes. Or lie a lot. Or just about bore her to death.

For Lydia's debut hour she abandons her standards and takes you on a frequently musical and horribly hilarious romp through the most ridiculous dates you've never been on.

Lydia is an actor, comedian, writer, and singer. She graduated from the Oxford School of Drama in 2013 and credits since graduating include roles at Theatre 503, The Old Red Lion, and the New Diorama. You can also catch her in new sketch double act KINGS! at Pleasance Courtyard with Adam Blampied of Chortle award-nominated sketch group The Beta Males.