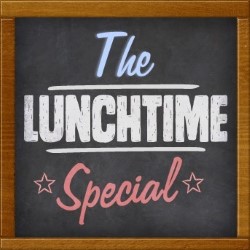 CKP presents some of comedy's brightest new stars in a lunchtime package show guaranteed to brighten up your day. Now in its 3rd year, The Lunchtime Special has previously played host to acts such as: Fern Brady, Pierre Novellie, Funmbi Omotayo, Steve Bugeja and Alasdair Beckett-King.

Each show includes a hand-picked line up of 5 or 6 comics:

George Zach - "His comic timing is impeccable" (The Skinny).