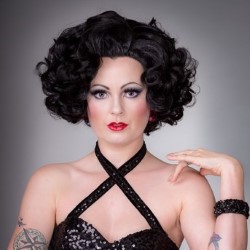 The hottest ticket of the Fringe is back! Treat yourself to a late night date with Lili la Scala and her glittering cavalcade of Cabarati. Previous guests include Jason Manford and The Boy With Tape on His Face. 'A riotous and scintillating evening of risqué comedy, fabulous cabaret and general impropriety' ***** (BroadwayBaby.com). 'There is no better way to spend an evening' ***** (ArtsAwardVoice.com).

The hottest ticket of the Fringe is back! After blockbusting Fringe seasons in 2012, 2013 and 2014, and a host of five star reviews, Lili la Scala returns by popular demand to delight you with her own brand of late night cabaret spectacle and a veritable cavalcade of Cabarati.

Lili has searched far and wide for very special guests to join in with the fun, and as ever is your most esteemed host, punctuating the action with her stunning voice and spectacular couture.

Come and feast your eyes upon a veritable variety smorgasbord: comedy, magic, burlesque, music and more...