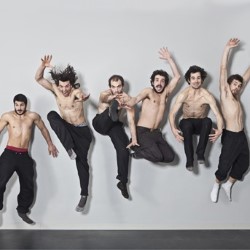 Dance performed on the following days in August 2015...

360: Underbelly's Circus Hub on the Meadows

Hunt with a joyful pack of six daredevils as they astonish with the rarely-seen spectacular circus skill of Russian Swing. A catch-your-breath hour of madcap humour and beyond belief stunts. This towel-wearing team of astonishing acrobats dice with danger, human catapulting themselves high into the air from a giant metal swing, and dodging items onstage with alarming dexterity. Take a walk on the wild side with the joyful La Meute, where six playful performers test each other to see how far they can go... 'Young, sexy, scruffy and risk-taking comic acrobats' **** (Times).