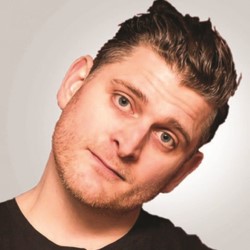 Are you happy? No, of course not. You're not supposed to be. The only human beings who're truly happy sit around the war memorial drinking shoe polish. Forget trying to be being happy, embrace the misery and try to enjoy the simple things in life, such as an hour of unpretentious, brutally honest stand-up comedy that's way better than you think it's going to be. 'He sees that thin line, and he runs towards it at full speed, but stops in just time to avoid seriously getting anyone's nose out of joint' **** (ViewsFromTheGods.co.uk).