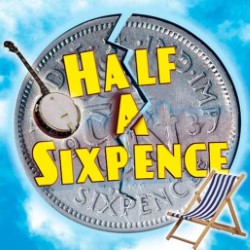 Flash, bang, wallop - what a show! Kipps and Ann were childhood friends. When they were parted as children, Kipps cut a sixpence in half and told Ann to look at it whenever she missed him. Years later they meet and re-kindle their childhood friendship. Then everything changes... A classic musical comedy re-imagined for today's audience with showstopping numbers such as Flash, Bang, Wallop and Half a Sixpence, this show has something for everyone!