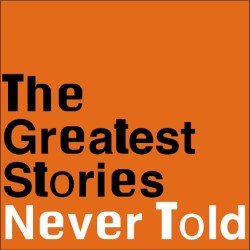 The Heretical Historians present a series of short comedies based on the bizarre, true stories that history forgot: The Pope who censored the Vatican statues; the ministers who drank to better their government; Julius Caesar's adventure with his pirate friends; Lenin's desperate (disguised) dash on the eve of the revolution and the British attempt to control India's cobras. A riotous evening of laughter and history as you've never known it. Warning: Probably considered educational by some. We disagree. Separate warning: Contains spectacular snake finish.

Centuries from now there is a slim chance that the 2015 Edinburgh Fringe will be known as host to "one of the greatest theatrical events of history, in history": that's right, the world première of The Heretical Historians first show, The Greatest Stories Never Told. A collection of short comic plays based on true historical events that have never had their absurdity dignified. Featuring figures as varied as Julius Caesar, the Shah of Persia, Lenin and Pope Paul IV, and scenarios such as kidnapping pirates, drunken adventures and large scale emasculations, each story promises to be unknown to audiences but instantly accessible and downright hysterical.

Featuring a diverse creative team, The Heretical Historians are three Northern brunette lads (one of whom wears glasses) and one ginger chap from The South, each with extensive experience as theatre-makers. All graduates of East 15's World Performance programme, having knowledge of both the world and performance, yet mastering neither. Although this show is their première as a company, the team have been attracting laughter and odd glances together for several years, creating many in-house productions during their training. Matthew Jameson, director and writer has had plays produced at both Edinburgh and Prague Fringes including the alternative WWI play, Dear Mister Kaiser (2014), the recipient of 5* reviews and well received by a strange man who bought him a pint.

In three words: COME for the ridiculous stories that you can't believe are true. STAY for the most original comedy that will undoubtedly be hailed as "Horrible Histories for Grown Ups" by lazy reviews. LEAVE misinformed, unamused and covered in snakes not covered in snakes.

Script and Directed by Matthew Jameson